Cosmic rays are highly energetic particles which originate from extraterrestrial sources. A distinction between soft cosmic radiation stemming mainly from our sun and hard cosmic radiation produced outside our solar system can be made. When interacting with particles in the earth's atmosphere, primary cosmic rays can induce a high energy shower cascade yielding a multitude of newly produced particles. 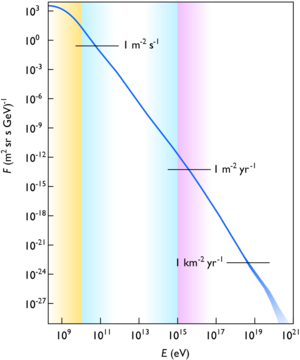 Primary cosmic consists of about 90% of protons, about 9% of helium nuclei and 1% of heavier nuclei. The precise composition depends on the considered energy range. The energy distribution of primary cosmic particles, as shown o the plot on the right, has a most probable value of about 300 MeV (3 x 106 eV) and drops sharply for increasing energies. However, cosmic rays with energies up to 3 x 1020 eV (~ 50 J) have been observed.

As the energy of a primary cosmic particle hints at its origin, a classification in soft cosmic radiation with kinetic energies up to several hundred MeV and hard cosmic radiation is done. Soft cosmic radiation originates from the sun. The relatively low energy of these particles allows for a deflection due to the Earth's magnetic field. The deflected particles are steered towards the magnetic poles where they interact with the atmosphere which can be seen as polar lights.

Schematic representation of a cosmic ray shower. The interaction of the primary proton with the atmosphere gives rise to secondary particles.

The most prevalent particle species in the showers are electrons, photons, protons, neutrons, pions and muons. While the former four can be considered inherently stable on the timescales relevant for a cosmic shower formation, pions and muons have a finite life-time. Owing to relativistic effects, the detection of muons on the surface of Earth is nonetheless possible. Measuring these secondary muons paves the way to reconstruct properties of the cosmics shower itself as well as the primary particle. 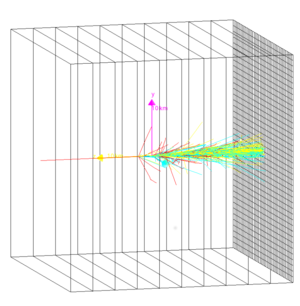 Geant4 simulation of an atmospheric particle shower triggered by a 10 TeV proton.
Retrieved from "https://wiki.muonpi.org/index.php?title=Cosmic_Rays&oldid=393"