The SiPM board is a printed circuit board (PCB) designed to dock and process the signal from the SiPM-scintillator coupling into a readout. Ideally no information such as timing from the scintillator should be lost, and the signal could be amplified/ processed with the board. In some applications involving significant temperature fluctuations, a compensator could also be built into the board. For the Muonpi project, the board should just be able to dock the SiPM-scintillator coupling to the readout.

The circuit configuration of the PCB varies depending on the number of SiPM's it needs to accommodate. For housing a single Ketek PM3350-EB SiPM the configuration is to just connect it with ground and readout/ bias. However, for connecting multiple SiPM's there are two possible configurations: parallel (p) and hybrid (h) configuration as illustrated below. 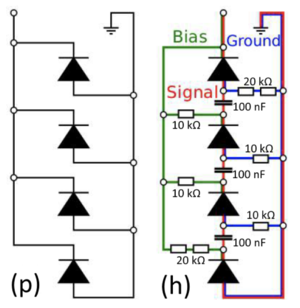 Parallel (p) and hybrid (h) configuration of SiPM board [1]. The signal path is depicted in red, the bias current in green, and the ground in blue.