A muon (μ) is an elementary particle with unit electric charge and a mass of about 106 MeV/c2. Muons have a mean lifetime of about 2.2 μs and decay primarily into electrons and neutrinos.

Muons are elementary particles which interact graviationally, electromagnetically and weakly. The particles do not undergo strong interactions, owing to their half-integer spin. The mass of muons is about 106 MeV/c2, making them about 207 times heavier than electrons. 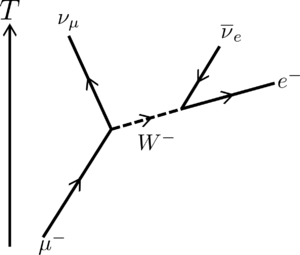 Muons have unit electric charge. Conventionally, muons (μ-) are considered to carry a negative charge, while their anti-matter counterparts (anti-muons or μ+) are positively charged. The weak interaction mediates the decay of muons. As weak processes can be considered slow on typical sub-atomic timescales, the muons exhibit a mean lifetime of about 2.2 μs. The most common decay products are electrons and neutrinos.

Classically, the mean path s is given by s = ct, assuming that the muons have a velocity close to the speed of light c. This expression yields a mean path of 660 m. Consequently, the large majority of cosmics shower muons would decay before they arrive at the surface of Earth.

However, as the muons propagate with a velocity close to the speed of light, a relativistic correction to this calculation has to be applied. Namely, the mean lifetime has to be Lorentz transformed to the reference frame of a stationary observer (stationary with respect to Earth). The

-factor is given by:

. This yields an Eigen time

m = 27 km. This relativistic time dilation (or equivalently length contraction) enables the muons to reach the surface of the Earth before they decay. Our ability to measure muons on sea level is therefore direct evidence of the relativistic mechanisms that govern the propagation of particles travelling close to the speed of light.