A scintillator is a material characterized by the spontaneous emission of electromagnetic radiation, when exposed to ionizing radiation. This behaviour is exploited in scintillation detectors in which a sensor (such as a silicon photomultiplier) is coupled to the material in order to detect the emitted radition.

The passage of ionizing radiation through scintillating material can excite electrons to higher atomic energy levels. As these levels are commonly not stable, the subsequent de-excitation of an atom can occur via the emission of electromagnetic radiation. The energy, and hence the wavelength, of the emitted photons is determined by the energy gap of the two energy levels between which the de-excitation takes place.

Schematic of atomic excitation during fluorescence and phosphorescence

Different de-excitation mechanisms can occur. If the ground and excited energy state carry the same spin quantum numbers the term fluorescence is used to describe the process. If the quantum numbers differ and a spin-flip is required to enable the transition one speaks of phosphorescence.

The de-excitation can also occur without the emission of radiation. 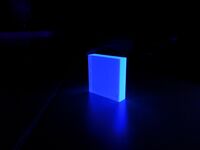