The current detector design is based on a plastic scintillator, wrapped in different types of foil, and a Silicon Photomultiplier for the collection of scintillation light. In this article, the assembly of a detector module will be explained.

How the detector works

Simple working principle based on the scintillator and SiPM page, putting it in context with our project.

How to build a muon detector

Independent of the size and shape of the scintillator the following materials and tools are used for building a scintillator detector: 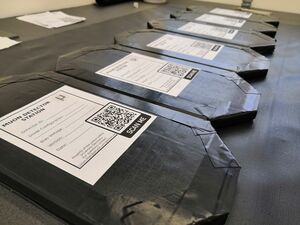 We have a time lapse video of a full detector assembly run on YouTube here.

Our detectors come in many different geometries and configurations.

The original detector geometry is chosen to maximize the light collection efficiency while having a large area for a high muon count rate. This geometry was determined both experimentally [1] and theoretically [2] to yield the best performance for a given detector area.

The Original - Half Size

The U-BLOX chip can only assign accurate timestamps to a limited amount of events per second. A high muon flux can lead to a large dead time (time interval in which the detector is "blind" to events). With the Original type detector, we currently (HAT version 3.1) encounter a deadtime of 20% to 30%, depending on the threshold level. In practice, this means that we lose about one-third of all events. From an economic point of view, it makes sense to reduce the detector size to reduce the muon flux to reduce the dead time. Cutting the Original in half will help to make the detector more efficient (tests pending).

Reusing the "veto" plastic scintillators from the TAPS detector, we have an excellent small and versatile detector for measuring cosmic muons. Significantly smaller than the standard type, the detector dead time imposes no problem.

The detectors are labeled for proper documentation after the assembly. On the label, the following information about the detector is persisted: 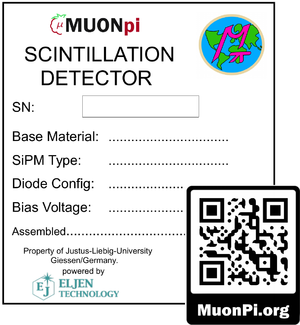 Label for the detectors.